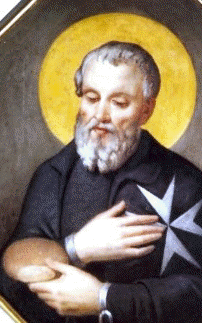 because of his care for the poor and the sick,

and through him founded in Jerusalem the Order of St. John the Baptist,

give us the grace of seeing, as he did, the image of your Son

in our brothers and sisters.

We ask this through our Lord Jesus Christ your Son,

who lives and reigns with you and the Holy Spirit One God,

for ever and ever.

Blessed Gerard, pray for us.

Historians argue about his origin, who his parents were, where he came from. But what does it matter whether he hailed from Amalfi or Provence? The role he played in Jerusalem at the end of the 11th and the beginning of the 12th centuries is indisputable.

We are here to celebrate a man who has been described as courageous, determined, intelligent, enterprising, practical, but most of all pious. We know him as Blessed Gerard, the founder of the Hospitaller Order of St John of Jerusalem.

It seems that Gerard arrived at St Maria Latina to work at the Benedictine monastery as a lay brother. Apparently he arrived in Jerusalem with a group of fellow lay brothers who, like Gerard himself, had given up their worldly possessions to serve Christ. It is not unlikely that some wealthy merchants from Amalfi wanted him to ensure that their investment in the Jerusalem hospital was carried
out as they wished. The Benedictine monastery operated a hospital and a hospice that served pilgrims who arrived in the Holy Land. Although the journey
was considered short - only five months from the western coast of France! - it was a journey fraught with risk and danger: bad weather, shipwreck, robbers, bandits and dangerous roads. As a result many pilgrims arrived at their destination ill and in need of care and help. There was also a growing number of wealthy elderly people who traveled to Jerusalem to die there; the men donated their money to the Benedictine monastery, while the ladies donated theirs to the convent of St Mary Magdalene. All of them wanted to be among the first to see Christ’s return.

Already in 1063, the new hospital and hospice were completed. These establishments were run by Gerard and his staff. He was described as “humble and very energetic” and his brotherhood cared for the sick, buried the deceased, and showed the pilgrims around to all the Holy Places they wished to visit.
Politically, the final decades of the 11th century were difficult in Jerusalem. When Blessed Gerard arrived, the city was ruled by Fatimids, who were Shia Muslims. In 1073 they were deposed by Seljuk Turks, who were Sunni, and who remained in power until 1098, when the Fatimids returned. Considerable diplomatic skill was required of someone who led a Christian establishment in a Muslim state. Of course it helped that Gerard opened the hospital gates to patients, irrespective of religion and ethnicity. Nonetheless it was a balancing act of no mean measure.

Thus, when the Fatimids returned and expelled all Christians from the city, Blessed Gerard and his brothers were exempt. The new rulers had barely been back for a year when the crusaders Raymond de Toulouse and Godefroid de Bouillon and their armies besieged the city in March of 1099. It is said that Blessed Gerard “used his influence” to help them win. The rulers of the city had poisoned the wells around Jerusalem and apparently Gerard’s main assistance was in supplying the crusaders with lifesaving water.

Legend has it that Gerard tossed loaves of bread over the city walls to the crusaders. Be that as it may, the authorities accused him of hiding gold in the hospital to avoid paying tax. He was imprisoned, questioned and tortured. When the crusaders, under Godefroid de Bouillon, conquered the city, they released Blessed Gerard, whose fingers and toes had been badly burned. He walked with a limp for
the rest of his life. His most common portrait shows him in chains with a loaf of bread.

Gerard was free and the Christian king of Jerusalem offered him whatever he wanted. Blessed Gerard returned to his hospital and made all the necessary adjustments to be able to receive all the sick and wounded the Crusades had brought.
The hospital’s needs had changed. Even though there was a semblance of peace during the following two decades, there was a new kind of patient: the wounded crusader. One of those patients was Raymond de Puy, who would succeed Gerard as leader of the
Order. The European nobles who were treated at the hospital were inspired by Blessed Gerard’s compassion and the excellent care
they received and when they returned home healed, they donated both land and money to the Order.
As the hospital grew in size, Gerard and his brethren found the Benedictine rules too restricting and founded a new religious order, the Order of Saint John of Jerusalem, to benefit the sick and the poor. The new Order adopted rules that contained parts of the orders of St Benedict and St Augustine.

In 1113 pope Paschal II issued a bull, recognizing the Order of St John as an independent religious order to serve Christ by serving the poor and the sick.
Thanks to the papal bull the Order could choose its leaders without the involvement of bishops and other religious authorities. The Order could also own property. Due to the economic and academic changes that occurred within church and state during the middle ages, the Order to St John of Jerusalem was able to become an international organization. The Order owned property near the most prominent pilgrim routes in Spain, Italy and France, and it rapidly increased in both wealth and fame. Hospitals were built in many Mediterranean ports.

In spite of the rapid extension of the Order, Gerard remained a humble servant. He encouraged the members “to be servants and slaves to our Lords, the sick”. This was both novel and earthshattering in a society ruled by strict hierarchies and family ties.
Serving the sick and the poor would express the spirit of the Order, because by welcoming and serving the sick and poor, they welcomed and served Christ. The military aspect of the Order became ever more necessary because of the real circumstances in Jerusalem and the ensuing need to protect both the pilgrims and the city itself.
The brothers of the Order called themselves ”servants and slaves to our Lords, the sick”. The latter were referred to as “Christ’s poor” or
the “holy poor” and at the brothers felt themselves growing closer to Christ by serving these “least of brethren”.

I do not believe that Blessed Gerard planned his life in Jerusalem. Even if he was the emissary of the Amalfi merchant he could not
possible have foreseen the crusades and the chaos that ensued. But he was a man perfectly suited to meet challenges head on without being shaken by them. He had a remarkable ability to adjust himself to a situation in the best way possible; he took personal risks in accordance with his conscience and continued his work, reshaped to fit in with the new circumstances. He saw as the calling of his life to heal body and soul and he did that as a Christian entrepreneur.

The hospital/hospice in Jerusalem thus became an international organization. Blessed Gerard would not have been phased by the fact that the order he incepted is global today. His order created a new kind of monk: a man who can care for the sick and wounded and simultaneously defend them against aramed attack. It might seem like a dichotomy to speak of religious knights, but that was what the times required, a new way to regard and carry out divine charity. Such a balancing act could only have been performed by a man with the humble and flexible spirit of Blessed Gerard. What an
example of how God always finds the right person for the right time and place.

There is so much to learn from Blessed Gerard’s life and work - especially now. He was given generous donations and could have sat back and distributed funds to the needy for the rest of his life. But he knew that true charity requires a hands-on approach, the
human touch, if you will. As volunteers we try to work in the spirit of Blessed Gerard, to walk in his footsteps. That is difficult and challenging. Neither poverty nor illness are pretty and it is often hard to see Jesus in the person you want to help. And to walk in his footsteps, it is good to keep in mind that he limped around among his patients, every step fraught with pain without complaining. Our tasks are minor in comparison.

As volunteers Blessed Gerard shows us

After having established the Order, Blessed Gerard continued to serve the sick and the poor and his brothers for an additional 24 years. He handed over the order to Raymond de Puy.

On September 3 1119, in his seventies by then, he passed away, as record by one of his contemporaries:

“The Hospitallers lost the Blessed Gérard, the father of the poor and of the pilgrims;

that virtuous man, having arrived at an exceeding old age, expired in the arms of his brethren,

almost without any sickness, and fell, as we may say, like a fruit ripe for eternity."

His epitaph - as recorded by Fulchre of Chartres - reads:

“Here lies Gérard, the humblest man among the dwellers in the East;
The servant of the poor, a welcoming friend to strangers;
He was lowly in mien, but within him shone a noble heart.
The measure of his goodness may be seen within these walls.
He was provident in many things, painstaking in all he did;
He undertook many tasks of diverse nature;
Stretching out his arms diligently to many lands,
He gathered from everywhere the means to feed his people.
On the seventeenth day of the sun’s journey through Virgo
He was brought to Heaven, carried by angels.”

© 2022 Society of the Holy Rosary. All Rights Reserved.

This website and its content is copyright of prayrosary.info - © Society of the Holy Rosary 2019. All rights reserved.

Any redistribution or reproduction of part or all of the contents in any form is prohibited other than the following:

You may not, except with our express written permission, distribute or commercially exploit the content. Nor may you transmit it or store it in any other website or other form of electronic retrieval system.